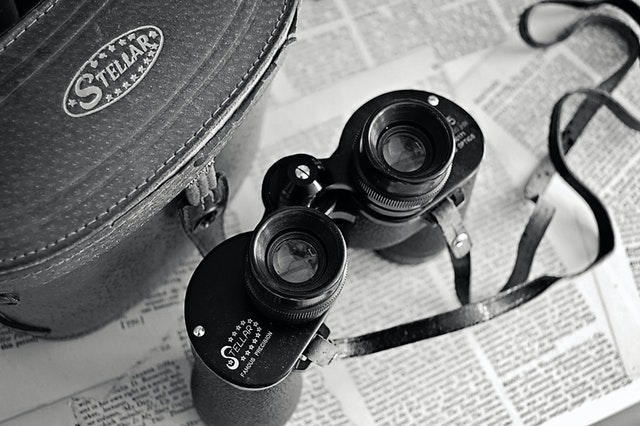 Since the GFC in 2009 most central banks have been trying to avoid deflation and gone to extraordinary lengths to support demand and stimulate the economy to drive
inflation up to the desired levels of 2% – 3%. But now inflation is the key concern for much of the global economy and financial markets. The sustained higher than anticipated inflation has been driven by a confluence of factors such as supply and demand impacts of the global pandemic, the ultra-easy monetary policy and fiscal spending thrown in for good measure. This has turned a deflationary world on its head with many suggesting the period of sustained low inflation is over. In response to inflation, aggressive interest rate tightening by the US Federal Reserve, Bank of England, the RBA and other central banks has heightened concerns of recession. The World Bank has said that for many countries recession will be difficult to avoid as it slashed its global growth forecast for 2022. We see Central banks walking a tight rope where on one side not enough action will ensure inflation is sustained at levels well above target and likely lead to stagflation, an environment of high inflation and weak economic growth. On the other side if they tighten too much, the economy will fall into recession. History of the US Fed would suggest that they will tighten until they break the economy and drive it into recession. Australia’s inflationary troubles while lagging the UK and
the US has been recognized by the Fair Work decision to raise the minimum wage by 5.1% and modern award wages by 4.6% to help just over 20% of the Australian
workforce. The impact of higher inflation and aggressive central bank action has driven both business and consumer confidence down with consumer confidence at levels normally seen
in recessionary environments. The positive is that as we go into whatever economic slowdown that eventuates, irrespective of the ability for the central bank orchestrate a “soft landing” and avoid recession, markets will begin to look beyond the weakness to economic recovery. This will likely see the bottom of the equity market drawdown. 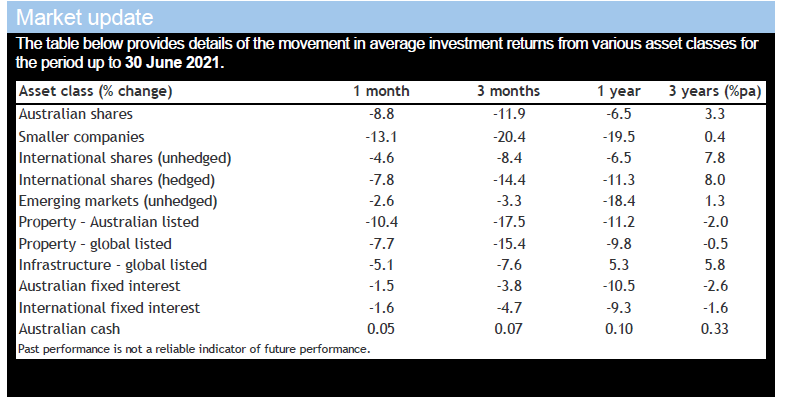 The 2022 financial year saw Australian shares (-6.5%) down with the last few months particularly weak. In June Australian shares (-8.8%) fell heavily as the concerns discussed above grew over the month. Small companies (-13.1%) were particularly weak as investors avoided the riskier parts of the market. Frustratingly for investors who had tried to use resources as an inflationary hedge Materials (-12.4%) was the weakest performing sector as the concern of the impact of a potential recession saw selling across the sector. Financials (-11.9%) were also hard hit as investors became concerned around bank exposure to residential mortgages in light of rapidly rising interest rates. Consumer discretionary (-7.3%) made up the weakest sectors for June.
Consumer staples (0.2%) was the strongest sector and the only sector to make gains for the month. Energy (-0.3%) and Telecom services (-0.6%) also fared relatively well.
International shares (-11.3%) fell significantly in the 2022 financial year on a currency hedged basis while moves in the Australian dollar help unhedged investors (6.5%). June saw international shares (-7.8%) on a currency hedged basis outperform the local market with currency exposure softening the fall (-4.6%).
Emerging markets (EM) had a very weak year (-18.4%) as higher risk assets were avoided. In June, EM Shares (-2.6%) outperformed the broader global market and the local market as investors bought into Chinese stocks (6.2%) weakness in Brazil (-11.4%) and India (-4.9%) and other parts of the market however dragged the Emerging market index down.

With the RBA increasing their target rate by 0.5% to 0.85% and the US Federal Reserve raising their target rate by 0.75% the largest hike in 28 years, to 1.5% – 1.75% and other central bank also increasing their target rates June was not a good month for bond markets.
Source: FactSet, AMP
The Australian fixed interest market (-1.5%) had it worst financial year (-10.5%) in history. International fixed interest (-1.6%) underperformed the local market in June but over the year (-9.3%) was a better place to be.
The aggressiveness of central banks was the surprise in June and so Australian 10-year government bond yield rose 34 basis points to 3.69% the highest level since early 2014. In the US 10-year bond yields rose almost 17 basis points to 3.01% with the market in the US a little less surprised by the Fed move due to the higher inflation seen there.
Economists are now expecting interest rates of 2.45% in Australia and 3.45% in the US by year’s end. However, our expectations are that inflation will moderate and the FED and RBA won’t have to move quite so aggressively.